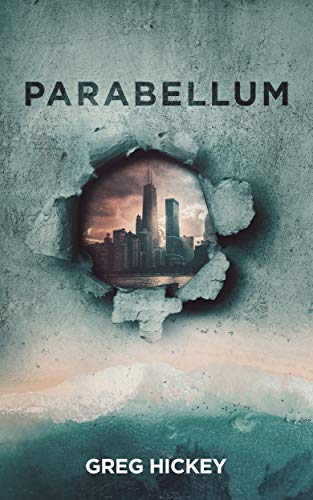 After finishing Our Dried Voices by Greg Hickey, which I very much enjoyed, I was excited to receive his new book, Parabellum, in exchange for an honest review. Parabellum (the title is brilliant) starts off with a massacre on a beach in Chicago, then flashes back one year, introducing us to four characters, one of whom we presume to be the mass shooter. This idea was very intriguing and had me instantly interested in these characters. What follows in the majority of the novel are the in-depth psychological studies of four potentially dangerous people and what might cause them to become a murderer. Unfortunately, a too-blatant clue eliminates one of the four right away, which I found immediately disappointing.

The characters are unnamed, which probably serves as a trope to present them as a kind of everyman, but for readability, I found it a bit more difficult to immerse myself in their stories because of this. We know them only as the student, the ex-athlete, the veteran, and the programmer, and their personalities and problems are given to us in detailed and poignant vignettes that are realistic and recognizable. I was able to empathize with all except the programmer, whom I found repugnant. As the lives of the four progress and come full circle back to the present, we are introduced to the victims of the beach massacre in what seems to be an attempt to humanize them and dramatize the event in greater depth. However, it’s too little, too late, and what we get is equivalent to a list of victims’ names and occupations we will not remember in five minutes’ time. While Hickey seems to have a strong understanding of the psyche and is clearly a talented writer, in this case, the end result is a somewhat engaging novel that starts out with a primal scream and suddenly peters out and ends with a disappointing and anti-climactic whimper. An original idea ends all too predictably, never doing justice to the incredible psychological insight of the previous chapters.

And though I was disappointed in the end, I still rather enjoyed the journey through the minds of these all too real characters. I definitely look forward to reading future novels by Greg Hickey. Three out of five stars for this one. —Christina Knowles