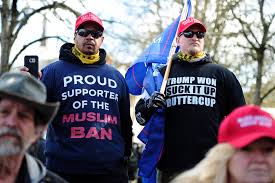 Fed Up with Tribalism

I think every American is fed up with the political chaos we are enduring in America. Never in my lifetime have I witnessed such division and contention. It’s exhausting and leaves us wondering if tribalism is so bad. Maybe it would be better to stay in our own little tribe, so we don’t have to believe that there are people who passionately believe the exact opposite of what we believe. I face this question every time a new scandal in the Trump presidency hits the news. Every time Donald Trump is caught doing or saying something illegal, immoral, or just plain stupid, I wonder how his supporters, some of whom seem like nice people otherwise, are able to so easily brush it aside and dismiss it, even excuse and defend it. There is a level of cognitive dissonance that is not easily explained by the “They’re all racists” justification. It seems like there is a daily influx of new evidence of Trump’s inadequacies in the area of basic human decency, but the support from his base does not waver, even from those who would not normally condone this behavior themselves. This led me to consider Trump supporters and their motivations, and I discovered that I could identify four different kinds of people who seem to think Trump is a good choice to run our country despite how terrible he’s doing at it and in spite of how repugnant of a person he is.

The Four Types of Trump Supporters

I believe there are at least four distinct types of Trump supporters, and this is why we scratch our heads in dismay when we find out someone we really like is a Trumper. Let me explain my theory.

But they won’t be hearing that on Fox News, Glen Beck, or the 700 Club. It’s not in their interests to let them see the nuances and the similarities we all share. It’s not in their interests to let them see Democrats as good Americans or even human beings. We are all guilty of our tribal associations and our preference for confirmation bias. If you want to understand how you are being manipulated, please watch The Social Dilemma on Netflix. It’s time to look beyond all that and talk to our neighbors, our family members with different views, and the people we’ve avoided because we think we know who they are. I just stereotyped four types of Trump supporters. Prove me wrong. Let me know who you really are and why you really support Trump. Let’s have a conversation, and maybe we will learn a little about who we really are beyond what we are told to believe.

The Ends Do Not Justify the Means

Numerous political scientists and historians have identified Trump and his obvious dictatorial tendencies as an existential threat to our system of government and our very freedom. I get why some Republicans put away their objections and followed Trump through that door, but by now, you should be realizing that some doors shouldn’t be used. It’s time to get back to governing. We need a government that represents all of us, a government that knows how to compromise and work together and create unity. Democrats, Republicans, Independents, Democratic Socialists, Libertarians, and every other political group need to compromise. Living in a pluralistic society means none of us gets everything we want. We all should get something we can live with. That’s what it means to live in a country like ours—Out of many, one. We need to stop justifying bad methods of achieving our important goals. Instead, let’s talk, negotiate, and find something we can all accept, and in the process, we can accept each other, rather than accepting more and more bad behavior from our leaders.—Christina Knowles

Afterthought: If you are really interested in practical ways in which all of our political parties can work together, cooperate, compromise, and have a fair voice, please read Why We’re Polarized by Ezra Klein. The first half of the book is an explanation of how we got here, but the second half is full of intelligent ideas of how we could all have a more fair and productive relationship with those of opposing views and how our government could get back to effective governing.