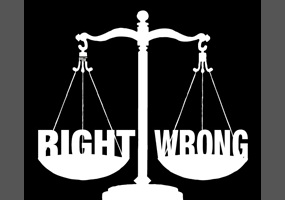 I hear a lot of people complain that morals are changing. Shouldn’t they evolve as we learn more? This leads to the inevitable debate of objective morality vs. relative morality. Morality seems somewhat subjective, but not completely relative, at least among thoughtful and intelligent beings. For example, we tend to believe that things are right or wrong on a standard of well-being. If the well-being of living creatures, for instance, is the standard, then we can develop an objective morality based on this even though circumstances will always dictate shades of gray in individual situations. So it must change as we change, right?

Over time, morality does indeed change. For instance, we now have more liberal views on things like punishing children, working on Sunday, considering a menstruating woman unclean, and understanding that homosexuality is not a choice. Certainly, we can acknowledge that most people now view slavery as immoral, genocide as evil, and democratic societies obviously have a different morality than totalitarian ones. At one time, great majorities of people considered these things right for one reason or another, so we know that morality changes.

Religious people tend to think we get our morality from a divine being, but this does not make sense if morality changes unless they are acknowledging that their god changes his mind as well. However, many do not admit this is the case. I would submit to them that they are more moral than the god they say gave them the basis for their morality. Even most bible-literalists in the Christian faith are far more moral than their god by today’s standards.

For example, the god of the bible told Abraham to sacrifice Isaac on an altar to prove his obedience. Abraham was willing to go through with this until God stopped him at the last moment, satisfied in his allegiance. When asked if they would be willing to sacrifice their own child on an altar if they thought their god had commanded them to, most Christians find the idea repugnant, which is a good thing. They often try to circumvent the point by saying that God would never ask them to do such a thing. I’m not sure why they think he would ask this of Abraham, but not them. Perhaps because their god, apparently, no longer shows himself to anyone. At any rate, they would not do it, which reveals that modern morality is more in line with well-being than the god who supposedly distributed this morality.

Another objection to this example is the contention that God would never make Abraham go through with it because God is good. However, Abraham seemed to have a close relationship with God, having direct access to God on more than one occasion. It seems he knew God and his character well, yet Abraham seemed to believe it was within God’s character to demand this sacrifice. He believed God would make him kill his son—and again, he supposedly personally knew God. And if modern Christians are right in thinking God would never ask them to do something like this, then at the very least, this is another indication of God’s changing character, or in my opinion, that he was just a creation of a harsh and cruel society of ancient men whose ideas of morality and what a divine being would be like are much inferior to that of modern man.

This is just one example of the numerous detestable and immoral things the god of Abraham demanded of his people. He also demanded genocide, rape, slavery, and the oppression of people based on race and gender. To say we get an objective morality from a source like this is ridiculous. We are much more moral than that. Their god seems to have the morality of an ancient Middle Eastern, patriarchal, and scientifically uninformed people group. I wonder why. –Christina Knowles