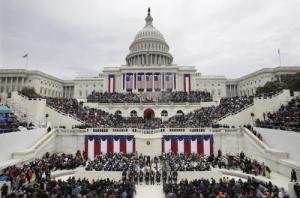 Today was Inauguration Day for Joseph R. Biden and Kamala Harris, a day overshadowed by the threat of violence and the realization of how close we came to losing our democracy. Of course, I expected to be joyful and relieved on such a day. What I didn’t expect was to be reduced to an emotional puddle of tears at the mention of each seemingly normal act throughout the day.

For the past four years, I’ve been increasingly ashamed of the United States and embarrassed by both its president and many of its citizens. I don’t like this feeling. I grew up filled with pride to be an American. I considered myself a patriot and loved our country. I was raised to believe that being an American meant being part of a sacred idea, an idea of equality and freedom and democracy. A place where no matter where a person came from socioeconomically, no matter what race or creed, Americans were “out of many, one.” We were truly a melting pot, or salad bowl, if you prefer. Of course, I knew we didn’t live out these ideals perfectly every day. It came to my attention in the last decade that being poor was more of a prison sentence than a result of poor choices. And when Barack Obama was elected our first African American president, I was both overcome with emotion and pride in America and stunned to see the overt racism emerge from the shadows with a force I had never imagined could still exist. Over the past four years, I have seen institutional racism exposed and seen our political leaders embrace the most vile of white supremacists.

I’ve seen our reputation around the world deteriorate at a startling but understandable speed. I’ve sat astounded while obvious lies spewed from the president and his supporters. I’ve been disgusted as his press secretaries abused the press while blatant lies rolled off their tongues. I’ve listened flabbergasted as those who knew better pretended they didn’t and played into what I can only assume they saw as political benefit. Flagrant lies and unfounded and absurd conspiracy theories became a daily occurrence; families divided over impossible to believe notions, friends were torn apart, and our nation fractured. Finally, I sat dumbfounded as deluded domestic terrorists attacked our beautiful Capitol and attempted to overthrow the government and overturn a free and fair election at the encouragement of a sitting president, a treasonous tyrant in the White House.

I knew we were desperate to get President Trump, the sociopathic narcissist, out of a position of power before he started another world war or damaged truth beyond all repair, but I didn’t realize how personally traumatized many of us were. Not until today.

I expected to be relieved, happy, and hopeful. I didn’t expect that the mundane and ordinary business of politics would ever affect me like this. I didn’t know that I’d been holding my breath for the past four years. I didn’t realize how long it’s been since I’d felt pride in being a United States citizen. I didn’t realize how much I still love my country and have hope in the ideals I thought we stood for, that we might, indeed, still stand for. I didn’t realize how completely traumatized we’ve all been for the past four years. I feel like we’ve all been held hostage by a hostile power, and we’ve just been rescued by the heroes, and it’s finally safe to let out our breath and just cry.

I’m not naïve enough to believe everything is going to be wonderful. I don’t expect miracles from President Biden. I know he’ll make mistakes, and he’s sure to stick his foot in his mouth more than once. He won’t be able to accomplish all he hopes to. I know that racism, conspiracy theorists, and hate will not be eradicated. Everything will probably not be okay, not for a long, long time. But for now, democracy held, the Constitution prevailed, and we’ve been rescued from tyranny, and we have emerged with a healthier understanding of the fragility of everything we hold dear, and a stronger resolve to protect it in the future. Today is a good day to be an American.—Christina Knowles