Twenty-three years ago today (March 7, 1991) I gave birth to the most precious and beautiful little girl in the world. Her name is Valerie Elise Knoche. Little did I know then the power she would possess over me for my entire life. Children have a way of doing that. You bring them into the world, you care for them, you love them, you teach them, and try to raise them to be good people, but somewhere along the way, they become completely their own individuals, separate from you with their own ideas, ways of doing things, their own hopes, dreams, maybe even beliefs that differ from your own. Children are the only people in the world that you love utterly unconditionally. It doesn’t matter what they do, you will still love them. They could grow up to be serial killers, and most parents would be right there in the prison visiting them and bringing them cookies.  Well, luckily, my children both grew up to be everything I could have ever hoped for or dreamed they would be.

Having a daughter is a unique experience. When Valerie was little, she was already independent, a little bit of a loner. Unlike her brother, Daniel, she needed her time alone for her imagination to flourish, and it did. She was always creative and still is to this day. She used to cut up her clothes (much to my dismay) and sew them into doll clothes when she was only four years old. They came out pretty well too. She made 3-D cities out of paper and tape and wrote poems as soon as she could write. Valerie loved to shut herself in her room and play by herself when she had too much of everyone else. She would stand up to anyone and didn’t often give into peer pressure. It was sometimes a struggle to get her to compromise with other children.

Valerie always had a mind of her own, and I always respected her for this. I could see that she would grow into a strong and independent woman, a woman who could and would do anything she wanted. As she grew up, she became a bit of a tomboy. Her favorite clothes were her brother’s cast-offs, jeans and over-sized t-shirts. Even when she became a teenager and began dressing like a girl, I never had to tell her she couldn’t wear something out in public because she was always modest. She was athletic and crazy strong, especially for someone who was always tiny. She would carry her brother or me around the house just to show us how strong she was.

Surprisingly, Valerie liked to do a lot of the same things I did. We both love to draw and paint, make crafty things, love dogs and nature, we like many of the same TV shows and movies. We are both loners. I say it is surprising because, unlike most kids with their parents, it seems like she liked being compared to me, which is the greatest compliment I could have. I like being compared to her too. She is friendly, polite, talented, funny, and kind–she has a sweet heart, loves fiercely, and gives generously. Valerie is intelligent and determined. She’s a hard worker, has dreams, and works relentlessly toward their realization. I am proud to be her mother, and love the fact that we are friends as well.

I love to spend time with her, and she loves to spend time with me. She often comes over and spends the entire day with me on weekends. Sometimes we just talk and watch movies. Other times we hike, take a bike ride, go out for tea at Montague’s, shopping in Old Colorado City, or make crafts or scrapbook together. I visit her at the fire station and we hang out watching movies. Did I mention she is a firefighter?

She is a certified firefighter and an EMT with a local station, and she also works in customer service with a phone company. Valerie has always had two or three jobs at a time, constantly, since she got out of high school. She plans on going back to school to continue in the medical field in some way–paramedic, nurse, maybe even a doctor someday. She has always been interested in medicine and healing. She likes to help people, stays calm under pressure, and once she saved a newborn baby’s life on a call. I told you I was proud.

Valerie and I also have a love of holidays in common. We have traditions that we try not to miss each year. Every Halloween she comes over, and we watch scary movies and pass out candy to kids who come to the door. We elaborately decorate the house for all the different holidays. At Christmas time, she comes over and we bake Christmas cookies and watch the holiday classics: The Year Without a Santa Claus, Frosty, the Snowman, and Rudolph, the Red Nosed Reindeer. Every year we brave the cold to go to Old Colorado City to Christmas shop in all the little indie stores and tourist shops. Even though she doesn’t live with me, she comes over first thing Christmas morning to open her stocking, which I fill every year. In the summer we roast marshmallows in the fire pit in the backyard and make s’mores.  We’ve done it in the fireplace as well when it was too cold outside. 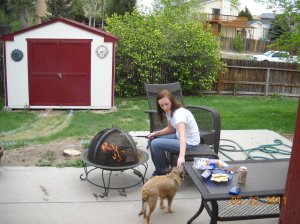 It isn’t always perfect between us. We’ve had a few times when we argued and hurt each other. One time she was mad at me for six months and didn’t talk to me the whole time. That just about killed me. I think I cried myself to sleep more times during that six-month period than I have in my entire life. That’s what I mean about the power that children possess. When you have a child, they own a piece of your heart that you will never have control of again. They can cause you more sorrow than anyone on earth. When they hurt, you hurt. When they’re crushed, you’re crushed. When they’re joyful, you’re joyful. And when they say they hate you, it feels like you will die. When they’re teenagers, you feel like strangling them, but you would die in their place without a second thought.

Having a daughter like Valerie has taught me a great deal about myself, about unconditional love, about pain, about determination, and about dreams. Having children taught me that my capacity for love, joy, and heartbreak is limitless. Having a daughter has increased my love for my own mother as well. Maybe we don’t ever really understand our parents until we have children of our own. Maybe we don’t really understand what unconditional love is until we love a child. I love you, Valerie, my Petrushka. Happy birthday. –Momma 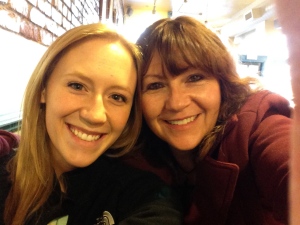 One thought on “What My Daughter Taught Me by Christina Knowles”