Recently I received the 2014-15 Theatre Season and 2014-15 Concert Season brochures in the mail. I get these every year, and every year I am stirred with excitement for the upcoming performances–right before I look at the prices and realize I will be lucky to perhaps see one or two of them. Still, I drool over them and imagine how uplifting their presentations will be, and I try to narrow it down to the one or two shows that I cannot possibly miss.

You see, I have a passion for high culture art on a middle class budget. By the way, high culture is not my term. I find the term very uppity, only because it connotes that it is the culture of the upper classes, but really it is simply elevated art because of its quality. Anyway, I adore the ballet, and I’m not talking about The Nutcracker. I want to see the New York City Ballet perform Balanchine, Twyla Tharp, and Christopher Wheeldon. I want to attend the symphony and the Philharmonic. The cello, violin, viola, and double bass all take me to a place that transcends the mundanity of my ordinary life. However, listening to Itzhak Perlman or Yo Yo Ma in person is little more than a fantasy. Then, of course, there is drama. I love it all–Shakespeare in the Theatre-in-the-Round, a Sondheim musical, or perhaps Gershwin or Bernstein, Post-Modern Drama, or even Interactive Drama. How about the opera? I’ve never been to a live performance, but I think I would love it because I am entranced by the voices of Luciano Pavarotti and Placido Domingo.

Unfortunately, living in Colorado Springs offers little opportunity to experience high culture; however, living on a teacher’s income offers even less. It made me wonder how many of my students would ever get a chance to be exposed to this culture. How would they ever even know if they liked it or not? Most cities adequately present opportunities to visit art museums at a reasonable, and at times, no expense. Children are taken by bus to see famous art exhibits and are, hopefully, taught its significance and how to appreciate it (Many students need no such lesson; for them the art speaks for itself). In Colorado Springs, the symphony also makes this effort, periodically offering free concerts to the public. But by and large,  the lower to middle classes do not have affordable access to premiere orchestra and symphonies, quality theatre and ballet, or the opera.

Of course, it is a matter of necessity that it is costly. Performers deserve to be paid. Often they must be flown in and put up in a hotel. Lighting and stage crews, sets, and a host of other expenses must be met in addition to the venue. Foundations have been helpful in bringing the arts to the general public, but opportunities are still very limited.

However, without previous exposure to this culture, these opportunities are often ignored. Because of the contrast of high art to pop culture, the comfort level and appreciation is not there among those who do not patronize the symphony, the opera, the ballet. Sometimes it can be an acquired taste. The average person is conditioned to enjoy the simple and reject the complicated. I believe exposing children to high art early is the key to its appreciation. Because high art is complicated, it is good for the mind. You’ve probably heard that listening to classical music makes one smarter.

In college I was taught that all children should be exposed to art, classical music, theatre, and ballet. My professors quoted studies that show children who are exposed to high culture get higher grades, have more social skills, and aspire to go to college more than students who never experience this culture. I was just talking to a friend, recently, who was trying to get a grant to take her students to an opera. What an amazing chance for them! Yet, I wonder how many of them will have to be dragged, kicking and screaming.

Even without research data, it seems obvious to me that children who are exposed to fine art, the symphony, the opera, and the ballet would be more comfortable as adults in the social situations they might encounter. They would be more culturally knowledgeable, which would give them more social currency. Social currency is helpful in business networking, interviewing, and in successful career movement. Beyond that though, it seems to me that the arts provide so much more than social value and mobility. The arts, specifically that known as high culture, provide humanity with beauty in a world often devoid of it. As the old saying goes, “Science is the how of life, but art is the why.”

Professor John McKean agrees that the time to expose people to high culture is when they are children, and these children have a right to the arts, which he calls “civilisation.” Referring to Liz Forgan, former managing director of the BBC, McKean states, “Amid the unending and unedifying turge of recent days, how wonderful to see Liz Forgan’s spirited attack on the dumbing down of musical culture among young children . . .Throwing them alive into a boiling vat of great painting, architecture and sculpture would be an added bonus. . .Forgan’s ‘Above all, don’t apologise’ is the key to the unwritten children’s right: the right of access to civilisation. (The BBC’s Culture Show is one among many examples that in our culture today, adults seem beyond conversion.) If Forgan had been forced to start with clapping games, she says, she might have turned to crime . . . Young children are never scared by great culture – it is only inaccessible to adults” (Professor John McKean, Brighton). According to McKean, children are ready for high culture, but by the time they are adults, they are intimidated by it. I believe they are uncomfortable with it merely because they have had no experience with it, and the common man has begun to see high culture as “high class” or even worse, as “upper class.”

Public broadcasting networks like the BBC, PBS, and NPR are the frontrunners in the accessibility of high culture to the general public. Indeed, without them I would not have discovered a love for ballet, opera, and the arts in general. It was on PBS (one of the few channels my family could receive with our rabbit ears) that I discovered Mikhail Baryshnikov, Balanchine, Pavarotti, and so many others on Great Performances. Where else would I have gotten this education in the 1970s, growing up in a lower income home? My public school offered no such opportunity. My parents never showed an interest in the arts, and even if they had, we would not have been able to afford to attend a performance. My older sister exposed me to classical music. She very nearly pursued a career in the symphony before she decided on a career as a chemist. I’m not sure where she discovered classical music. This is one reason why I believe in supporting public broadcasting. I would like to see more programs to bring high culture arts to children, but not only to children. The average citizen has a “right” to civilization as well, and not all adults are scared by it. I’m not. Maybe someday there will be a program to garner interest in high culture among middle class adults. I’ll be the first to sign up. Until then I will attend as many free concerts and art shows as I can, scrounge together enough money for a premiere performance or two, and tune my television to PBS.–Christina Knowles 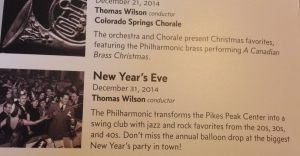